If you have an industrial sewing machine, did you know that there is a chance their are feet for it beyond the standard one that came with it?  I have quite a few in my 5 years as a Juki owner, check some of them out here.  A few weeks ago I purchased a new attachment for the Juki. It’s a 2″ Double Fold Binding Attachment: Now, before you go surf for an attachment for your industrial read the rest of the story.  This is my personal experience and sometimes I learn the hard way, LOL!

I have a bias fold attachment for some of my vintage machines, but after seeing a few of these online I wanted to see if it really could be done. I had visions of quilt binding with this sucker. Can you imagine? This binder came with 2 large screws, 2 small screws, attachment plate, and the binder itself.  The directions are visual so the first thing it says to do was to secure the plate above in the two available openings and tighten. From there, you place the two smaller screws and binder over the 4 holes you see above and adjust it to suit your needs. By this point I realized something was *off*.  It looks good and sets up fine, but the binder itself is welded the the flat plate you see so this is the only direction it will go.  What about corners??  Why is the fabric not lining up in the correct position?  So I cut some scrap strips and feed it through… NOW it’s starting to look like something!  The start of the fabric strip is weaved through the back slots of the bias maker. From there you gently feed it through the binder until it hits the middle.  (See the little pink peeking out in the middle?  At this point, it should be folded about 1/4″ on each side which it is.  I was expecting a bit more fabric folded here, but the way it’s welded won’t allow for it. In this next step I used a blunt tipped tool to help push the folded fabric under the metal “tongue” you see and start it feeding to the next folder.  Pull it through to the end then leave an inch or so to pin it onto the material you will use. From there you are ready to sew! Everything looks nice and the linen fabric I’m using butts up against the side of the binder. Looks like working. Here’s another piece I practiced on. So what’s the verdict? Is this tool a winner?

I’m not totally convinced yet.  I think I need to play around with it a bit more, but here is what I do know:

My plan is to order the adjustable bias tool in a slightly smaller size and with a matching foot then repeat the experiment.  I’ll share my results next week!

Do you have a bias binder for your industrial? I’d love to hear any tips or tricks you have! 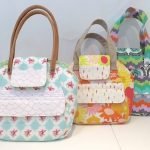 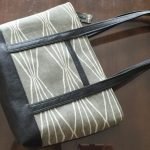