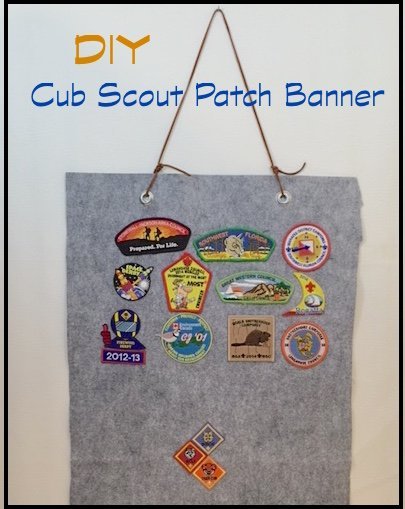 I live in a house full of Boy Scouts and Cub Scouts.  My husband is an Eagle Scout, so it was only natural that our boys joined Scouts when they started First Grade.

When you are involved in Scouting there are many opportunities for service projects, classes and other events both locally and out of town.  After these events are done, the boys are given patches with the event logo on it.  So you can imagine with three boys and tons of events, the patches add up and I start to find them stashed everywhere!!

I don’t know if it was me fed up of finding patches everywhere or being snowed in with sick kids last week but it was time for an intervention.  Time to do something with them.  So after a Pinterest search and a raid of my craft closet we started making Scout Banners.

Here’s what we did.  To start, gather the following supplies:

All these supplies were purchased at JoAnn’s (with coupons!). I chose wool felt because it was thicker and I didn’t want the floppiness of other felts.  Something else you will need is fabric glue.  Many Scout patches have an iron on adhesive on the back, but we chose to add a light coat of glue to the backs instead of ironing or hand stitching. I had each of my boys choose a color felt to work with.  Then, they spent some time separating their patches and where to place them.  Once that was settled, they glued them on. I let their banners lay flat in the basement for a day just to make sure everything was dry. When the banners were dry, we measured 5″ in on both left and right sides and made a mark.  The grommets/grommet setter have instructions on the back. Before you cut a circle over these marks, READ the manufacturers instructions to install. A hole cut too big will not accept your grommet and you will have two big holes to deal with. Smaller is better.

The final step is to take your leather lacing and pull one end through the grommet and double knot it to the main lacing.  Do the same thing with the other side and you’re done!  Now the boys have a great place to display their patches. And maybe someday they can show their boys!

While I was hunting for Scout Banner ideas on Pinterest, I found a few more great banner options:

* A longer banner with fringe and a dowel rod used instead of grommets.

*  Have Girl Scouts instead of Boy Scouts, try this:

* An arrow is used with this creative patch banner tutorial on Craftsy.

* This is a great idea for adding Pins, Beltloops and other Scout items to a banner.

Thanks for reading and have a great weekend!