Today marks the end of winter break in the household.  Until a few months ago, winter break was something I had never heard of. Who gives students a week off school when they just finished Christmas break? Well, up here they do! The boys were so excited to have another week to relax and play in the snow, sleep in and play with friends.  Oldest spent his mornings and early afternoon taking ski lessons for the first time. I’m so proud of him for making it through the week. The weather was dicey that last two days with temperatures in the upper 40’s and often raining. But he kept going and had a great time.  And while oldest was going back and forth to camp the younger two boys and I went on some adventures of our own. The highlights were seeing The Lego Movie (loved!!) and going GlowGolf.  The GlowGolf course was the hardest I’ve played in awhile. Not sure if it’s the I’m-Getting-Older-My-Eyes-Don’t-Work-As-Well or if my boys brought their A-Game! Really fun time though. I did manage to sneak in some time in my studio.  I finished a block in my 163 Patchwork book called “Yankee Puzzle” This was a harder one for me, but mostly because I haven’t worked on long angled strips before. After one run of this block I finally succeeded on this second one.  The next one I’ll be working on is called “Pinwheel Square”.

Off to play with some leather pieces I cut off the shoulders I showed you earlier.  Such pretty stuff. 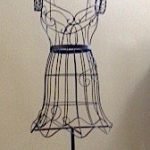